The US Rebalance to Asia and its Implications for the Region 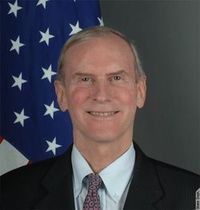 Ambassador Young is married to Barbara A. Finamore, an attorney who heads the China Program at the Natural Resources Defense Council (NRDC). They have three children: Michael is working in Washington, D.C.; Rebecca is working in Seattle, Washington; and Patrick is a junior at Chapman University in Orange County, California.